@Horse_ebooks (a.k.a Horse_ebooks) is a Twitter account that was an online installation art piece created by Synydyne. Though it in itself is considered an art piece alone under thier website, it has been affiliated with Pronunciation Book and Bear Stearns Bravo. Tweets by this account during 2011 and onward sometimes referred characters and parts of the Bear Stearns Bravo plot, which is a tie-in game also created by Synydyne. In BSB's Second Impact, the Yearbook Ending, it was revealed that Nicole is Horse_ebooks.

Created on August 5th 2010 by web designer Alexei Kouznetsov, @Horse_ebooks was originally used to sell ebooks online. The spambot account often tweeted random excerpts of text mixed with the occasional link to lead people to websites selling ebooks. Its absurdity in tweets was an effort to avoid spam detection.

The account was taken over by Jacob Bakkila on September 14, 2011. Bakkila posed as a spambot in secret for two years, tweeting cryptic excerpts of garbled text, sometimes referring to Bear Stearns Bravo themes and characters. It was not until September 24, 2013 that it was revealed the Twitter account was in connection to BSB.

The aftermath was a performance piece tittled 'Horse_ebooks 2'. On the day of the reveal, Bender and Bakkila answered phone calls called to the number they had posted on the How to Pronounce Horse_ebooks video. Like human spambots, the duo answered with random pieces of text, then hung up. 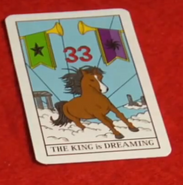 @Horse_ebooks, depicted on the tarot card The King is Dreaming.

@Horse_ebooks, depicted in the Breakdance Beach ending to First Impact.