Dr. Enron Lafayette[1], a.k.a. Dr. Lafayette, Lafayette, or simply Dr. L, is a career scientist employed as part of a think-tank for Bear Stearns' research facility on Bon Bon Island. He specialises in medical & theoretical career science[1], and has a PhD in motivotion.

In college "he was a lower-class lowerclassman, drifting majors, elbowdeep in dishes four nights a week for a few semesters until he switched over to the Hard Sciences and got a scholarship and recruitment offers from the Senate and the Five Banks"[1].

In the late 90's, Lafayette was working on experimental team building exercises as the Deputy Chief Scientist in the Department of Labour. After he'd finished for work one day, Jackie Dalton approached him in the parking lot. He offered Lafayette triple his salary at the time, and his own lab with the condition that all his research would be owned by Bear. Cisco Phillipe had also tried to approach around the same time previously, but was less successful[1].

Lafayette resigned the next day, and moved to Bear's research facility in Bon Bon Island to work on theoretical motivotion shortly after, as one of "Jackie's Girls". However, sometime around January 2007, whilst scuba diving around the island, he discovered Bear's underwater research facility, B.I.G. B.R.O.N.C.O.. The applications of his research that he discovered there were so disturbing to him, that he wasn't able to sleep for at least six months afterwards, by his own admission. 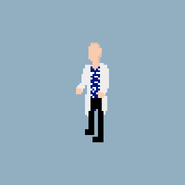 Dr. Lafayette's picture in the Bravodex.

In the Yearbook Ending.