How to Pronounce 19, or 19, is the title of a video uploaded to the Pronunciation Book channel on the 5th of September, 2013, and is the 59th video in the 77 Days Video Countdown.

19 lasts for 2 minutes and 49 seconds. For the first 2 minutes and 34 seconds, The Announcer makes the following speech (a.k.a. the 19 speech) after which there are 15 seconds of silence until the end:

"We turned the TV on in a middle of the gardening special. She hated to watch gardening. She said it brought back unpleasant memories. One channel up was a weightlifting show. That was more Her style, but it made me uncomfortable. The next show was a travelogue about a man and a woman who eat food in locations. The man was gregarious and seemed like he'd be fun to drink a beer with. The woman had an extremely resonant voice.

We change the channel again. A soap opera was on—a typical hospital scene: someone with amnesia, a rose on the bedside table. I was interested, but She said She knew how it ended so we moved on.

The next one took our breath away: a beach in black and white—high contrast—and a young couple, heroic, gorgeous as the wave swept in. It was a phone commercial, which delighted Her.

The next show was a period drama in ancient Greece. Men in toga spoke about democracy with British accents. I watch for a bit while She dozed off.
The next show was two women talking in an apartment. The apartment was a loft that look just like Hers. I remarked on the similarity, but She was sound asleep. One of the women wore a light grey trench coat and black gloves. They looked like they had something important to discuss, but the structure of their conversation did not allow them to bring it up. Their words were carefully chosen, and I suddenly became aware of my own physical weight and my placement in the room.

Were they glancing at me?
Was I intruding on this channel without an invitation?
If I turned it off, what would they talk about?
Could they tell each other what was really going on?
Would they drink?
Would they turn off the lights?

Would they walk around without worrying about the angle and the framing?
Or did one of them have something to tell me?
Should I wait for the other to leave?
Or should I tell them what I think? 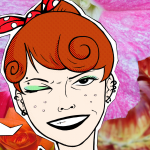