The LA Public Library is located in the Free Trade Zone, Gilded Corridor. It's heavily computerized, with the atrium being empty and the resources accessed mainly through the Pegasus system. Franco pays a visit to the Library in the Second Impact.

The library's collection is divided into seven sections. Each one contains about five books:

Career Science For The Rest Of Us! High School Edition

Comprehension Question: Do bullies have loud voices and love big meals? Explain why or why not.

Blackstar Books / 2005 0014.6673 BL Chapter IV: The People You Hurt When You Forget. You're certain to forget at some point - and it's certain to hurt you. We can all relate to the story of Sally, a thirty-three year old data specialist at Blackstar. One especially hectic day at the office, Sally forgot it was the birthday of her husband Mark, a thirty three year old data specialist at Blackstar. After work, the pair went out for drinks as usual ... but something was wrong. What's that feeling in the air? Sally knows where this is going. Mark's dancing - that's OK. Pay attention to the bartender. He knows one secret, too.

Rodechenko, K. / 1999 0017.8054 RO Praise for Previous Dr. Rodeo's Chuckle-A-Day Calendars: Dr. Rodeo is back in the saddle, and I hope he never lets go! [His calendar] made 1997 one big laff riot, and helped me cope with a difficult diagnoses. I'm a fan for life. - Dr. Lafayette, Deputy Chief Scientist, Department of Labor Dr. Rodeo is back in the driver's seat, and I hope he never downshifts. From his ruminations on roadtrips - "They can't ask 'are we there yet' if their mouths are taped shut ..." - to his wisdom on weddings - "Get in a car accident and you can avoid attending, or at least show up late ..." - Rodeo is America's answer to Voltaire. - USA Today (Starred Review, "Book Of The Year" Shortlist)

- True Cyberpunks RARELY cry if they get lost at the food store.

===== THE BOLSTER - ACT 11 ===== By this point you should already have "the girding" rounded out. Now you just need to complete The Bolster before you can move on to the outer hull segments. Here are the locations where you can find The Bolster Sky Keys.

When you're walking down the fang corridor (see Section 3.1, Fang Corridors) turn left before the final statue. Now walk back and forth repeatedly until you have a random encounter with a single Creep Shard. 1 in 255 times it will drop the first Bolster Sky Key. Careful: Creep Shards will often run away unless you are equipped with a NORUN bangle or cast TAR on the field.

- Melt the modem: To surf the net rapidly
- Jack in from Saturn: Literally, to have a slow or garbled connection; as a perjorative, used to demean a novice
- Log off for good: Die
- Walk the plank: To be banned by a mod OR to be forced to close one's own account by blackmail
- Ride the range: To surf the net casually
- Trapped in the pyramid: To be made into a netrider against one's will

What Happened on Your Birthday? An Encyclopedia of Notable & Quotable Events, 1999 Jun-Aug Vol. 1

Chapter 9: Dreams About Sandwiches We've all had one. Dreams about sandwiches may make you feel confused or overwhelmed. But just like dreams about arms, they have a natural explanation. Holding a hoagie and opening your mouth? In the waking world, you're probably a repressed singer, yearning for a microphone. Caressing a Bánh mì before noon? You're destined for high finance and heartbreak. Juggling burders with an insouciant smile? It's time for a new relationship.

Bodyslam Scorned: The Lost Writings of the Gnostic Philosophers

Chapter XVII: D'Angelo the Canny Even among the middle-period middleweights, D'Angelo the Canny was respected as a clever tactician. His stirring entrance theme was notorious for arousing crowds to the point of hystarical fervor. We learn much of D'Angelo's theatrics from the First Fragment: I strode onto the stone stage ... ... ... blazing[?] ... organ music is heard. A shattering and rapping[3] is heard. ... ... ... I jape and jest to tell the Body-Story of the "grandfathers"[?]. ... We know not to curse the true "puncher"[4]. Do not bring laptops or cameras to the stone stage. Do not bring outside drinks to the stone stage, or you shall compete on it as an equal, and wail.

The fragile White Rose (Rose candidus) blooms once every 33 years. It was a prized talisman among early peoples. Di Datos relates a humorous anecdote about the candidus in his Flores del Nuevo Mundo en la floración (trans. H. Dixon): Then I saw the savages in rows and columns! The visiting Priest presented the blind Arch-Chieftain with the white flower, which I knew to be a rare rose. Through my interpreter, I understood the savages believed the flower to be a curative for blindness. To my shock and that of the Priest, the Arch-Chieftain declined the gift. I later learned this tribe considered blindness a solution, not a problem.

Carts, M / 2007 0331.0564 CA (Mailing list information, including unsubscription instructions, is located at the end of this message.)

All The King's Men: A Presidential Costume Rave Royalty is royalty ... and for one night, so are you. The Age of Presidents is upon us. Debauchery and revelry on cobblestone streets. Executive authority over the dance floor. Cast your vote for a night of kingly escapades and be sure to keep the hotline to Russia off the hook. DJ Brassy Lisa (Resident at Jubilee Tower), DJ Junky Turgo and more will veto any attempts to stop the bash before dawn. Partying is your civic duty, so there's no excuse for missing this royal revival. $15 at the door, $10 in costume, Free as a (convincing) Billy Clinton, whips mandatory.

Giddy up, cowgirl! You're about to ride the range all night long. Lasso your man with this difficult-to-make Kyrgyz tartlet.

Every FeBrizzio's VSIP comes with a compelling set of starter simulations. Choose one of these richly textured experiences from the Main Menu:

Songs in the Key of Cleveland: Jazz Standards from the Cleveland-Elyria-Mentor Metropolitan Statistical Area

Unbranded and Off-Brand Gladiator Sandals - The Bernie Kosar Wedding Sansal Scholarship (Western Region) is a $75 one-time tax-exempt grant for Judeo-Christian marriage participants. As agile and graceful as its namesake, the BKWSS will send you gliding down the aisle in a fashionable and robust pair of scrap fabric wrap-sandals (bulky type).

A/X Armani Exchange Flats - If you have the grades and the looks, step up to the John Carney "Extra Point for Fashion" Wedding Flats Functional Shoe-Bond In Partnership with A/X Armani Exchange. This one-time $150 debt-equity inssuance is a practical way to "split the uprights" in good times and in bad.

Louboutin 120mm - Got 'em! Break through the line and pounce on the target of your affections the Bill Romanowski way: sweaty, dirty, straight ahead ... and no bull! The Bill Romanowski "Beefy Heels + Sexy Tackles" Charity Load offers $1,000 to a certifiably engaged Midwestern love-dyad. Do you have the guts to wrap 'em up and teach 'em a lesson?

(This book has multiple pages

O! A spider wakes at dawn. Its door barr'd shut, its curtains drawn. A quiet breakfast in a pious home: This is why all spiders live alone.

His rippling chest hesitated as she ran her hands athwart his rock-hard thighs. Did he know? Certainly, her bowling had suffered. But this was more than just strikes and spares. "MANDY," he said. "YOU PREGNANT?"

Dangers Of The Beach

submarines. So I told him, if he was going to hang out with the sand and the sun, he'd have to be on the look out for the problems that plague our beaches. Every true Cop knows the following three dangers by heart:

HARD DRUGS
There's nothing a Cop hates more than hard drugs, but on the beach, double. Call'em what you want, but in my book they're bad news. If you see any junkies, look out and tell me, or another Cop.

WAVES
Surf's Up? Waves are OK to look at. But when you're in and around them, things can get dangerous FAST. Best to just not try.

MALNUTRITION
Make sure to get enough food in your mouth. Don't spill it or I'll put you in Jail, myself.

A Treasury of Egyptian Laments

But foremost among pyramid funeral shouts is the Demotic Burial Wail. A classic in its own time, this fan favorite lets bystanders know you're truly agitated. And it's not just for funerals. Modern Copts have taken to using the Wail far away from any pyramid - the boardroom, the dinner table, and the bathroom are all fair game.

17-year-old Marie yelled as the car went fast! "Look at 'em" yelled 18-year-old Richard. You frown as the other teens yell. Something is bothering you about this whole mess. How could 14-year-old Benry have gone around the loop so many more times than the others already? You know The Snake Charmers' car can go 55 km/h. You know Benry's car can go 45 km/h, that's for sure. The difference must be in the rates of acceleration. Give the Snake Charmers a speed boost by writing their rate of acceleration in the space below. 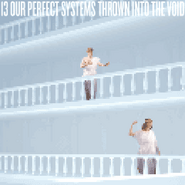 The library atrium depicted in LTAS' gif for How to Pronounce 13. The text reads, "our perfect systems thrown into the void".