The tarot is a deck of playing cards used to mystically divine information. Whilst the the most common and iconic tarot deck is the Rider-Waite set, there are many different varieties. In Bear Stearns Bravo, career scientists use a unique set (unofficially known as "career science cards") to gain insight and give advice to their subjects [1][2]

As with the standard Rider-Waite deck, the tarot cards used by career scientists come in two flavours: unique cards which make up a major arcana (Moldy Pantsuit, Sport, Twins), and variations on a theme, which make up a minor arcana (Change I-VII, Charm I-IV). Known career cards and their interpretations are listed below, and are divided in the manner described above. The positions they are drawn in for certain interpretations (past, present or future) is also noted.

The Moldy Pantsuit a.k.a. Moldy
If this is what living in the castle is like, I've got to run.[2]
[Present] What seemed like a curse is now a blessing. An ancient symbiosis, a brutal epiphany ... a forgotten weapon? And ... it's roomy in the hips.[1].

Chalupa Chalupa Supreme a.k.a. Supreme
Looking balanced and tan. Smooth sailing ahead, wear your shades all day.[2]
[Future] You are on the roof of a building, you are wearing your best outfit. There are some faces here that you recognise. It's a party, but everyone is watching the sky. It's too early, but that won't stop them. Doesn't feel like summer anymore, you better walk along parallels. A distant note that's not a song. You always swore the city was bigger than this[1].

Premature Lunch a.k.a. Lunch
Stymied again, but a deal is a deal. Leave the scraps; they'll clean it up.[2]
[Present] Dig in great chew chew yum hand me some of the salt. Who ordered the spicy? He was a serious eater that year. That's one burger you don't wanna mess with. Western flavours, Eastern values. Chocolate soup? I've got time. I'll have one of everything and a pepsi to go.[1]

Sport
The triplets are looking good this year; nothing can stop them once they get going. Cheer for them, please.[2]
[Past] Go for it long, I'll take a double. Got any sunscreen? That play's so last season. He looks worried; is he hiding the ball? That's a big one--can't jump 'im, so we're gonna have to go round. Can't handle the fire? Relax on the veranda. Let's hear a big one for the home team.[1]

Twins
It must have already descended.[2]
[Present] We’re all bound to others and you’re no exception. Everything you do affects your twin. Who’s your twin? It might not be who you think.[1]

Complaining to the Waitress a.k.a. Complaining
Pool the elements from the sky. A dry meal guarantees a conflict.[2]
[Future] Your country fried steak seems a little dry. Show the waitress the true meaning of power as you wield your ability to simultaneously chew and scream.

Dance Floor Calling a.k.a. Calling
Something is going to happen ... in 32 days.[2]
[Future][no dialogue, Colorado simply stares at card. Ominous music plays whilst camera zooms in on card, then cut to black & restart][3]

High Brow
Not my favourite. Too much talking and no action. Great music, though.[2]
[Past]Haven't seen that card in a while. Some people accept their place, others don't have to. [3]

The American Dream a.k.a. The
I'm proud of everything I see.[2]
[Present]Now you've got it all--will you give an encore? [3]

Dinner with a View a.k.a. Dinner
She's sitting alone. At least it looks that way.[2]
[Future] Eating squid alone--wonder what’s on your mind? You’ll finally be able to see it all, but who’s looking at you?[1]

Construction
Hot day for a suit, but we have to finish before sundown.[2]
[Past]You’ve worked hard to put yourself together, always building, a better tomorrow in mind.[1]

Fog Of War a.k.a. Fog
It's not the real one, but that doesn't mean it's not dangerous.[2]
[Present]A bloody scene: soldiers fight for God and country, but who knows the general's true motivation. Just because you see where your enemy's coming from, doesn't mean you know where he's going.[1]

Ocean Genesis a.k.a. Ocean
An old friend moving up- congratulations.[2]
[Past] [Colorado, to Franco]: Sun, surf; you must have come from a beach community

[Franco]: That's wrong; I grew up in Neo Bernardino

[Colorado]: Cards never lie. Maybe you were adopted, maybe your family is hiding something. Whatever the case, you don't know the whole story.[1]

The Five Friends a.k.a. Friends
Unexpected. They've got something to say, you can see it on their faces.[2]
[Present][1] [No dialogue; Colorado's face drops. Scare chord plays & zoom in on card before cut to black with the option to restart Second Impact]

The King Is Dreaming a.k.a. Dreaming
Don't know what to make of this; it must not be important.[2]
[Future] There are forces beyond your imagining whether they're active or not. Even with our Western self-determinism, we have to acknowledge that royalty is royalty. Unpaid intern or chief executive, everyone must bow before the king.[1]

The minor arcana career cards come in four suits, all starting with a "C": Challenge, Chance, Change & Charm. Each is known to have at least one card with a title after the suit instead of a number (e.g. Charm Chieftain, Challenge Corsair).

Challenge I
This can only keep me alive so long.[2]
[Future] Despite your best intentions, you find yourself helpless and isolated. What once seemed like a promising gift is now just a way to keep your head above water.

Challenge II
The castle is a long way away, so keep your signals crisp. Find high ground.[2]
[Past] You’ve always been a great communicator, and it’s safe to say that others see you in the same light. Whether it’s clearing up some confusion between two friends, or spinning a yarn all your own, you’re never at a loss for words that persuade and delight. You use your gift of gab for everything, even convincing your supervisor to let you duck out early on the occasional Friday.

Challenge Corsair a.k.a. Corsair
Skip the island. Your leggings are looking great. Nice barrel.[2]
[Past] Adventure! What's a little data scurvy when there's web-rings to plunder. You got a saber in your left hand and a track ball in your right. If the prisoners won't log off, we'll make them walk the plank.[1]

Chance I
Not what I wanted to see today.[2]
[Past] You've emerged from tumult with a powerful solution, but there are some problems that man depends on for his very survival. Praiseworthy today, contemptble tomorrow.

Chance II
Even worse, meet me in the lodge.[2]
[Future] Double sky keys and cowering yeomen; all things considered, it could have been worse.[1]

Change I
A message I've been waiting to hear.[2]
[Present] Right or wrong, you hold your homehand in high regard. Your fortune and LA's are one. That's the curse and blessing of patriotism.
Change II
Change III
You'll make management soon. Keep the gloves on please.[2]
Change IV
Change VII
Just promise me you won't wave goodbye.[2]
Change Chef a.k.a. Chef
Flip'em high and keep it hot. All the Doric columns in the world won't spoil this.[2]

Charm IV
That's three drinks too many. Doesn't matter if you spill a drop. Look at that smile.[2]
[Present] Perhaps you've been a little too charming. Your sturdy peirs have attracted the captain of the SS Dream Boat. But will your mooring line be stout enough to keep them fastened to your bollard?

Charm Chieftain a.k.a. Chieftain
Elegant evening wear and a sword; he must be important.[2]
[Past] You're from the past but now you fit right in. At least, that's what it looks like from out here.[1] 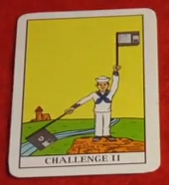 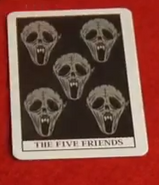 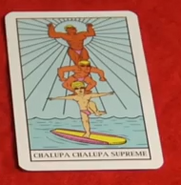 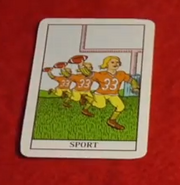 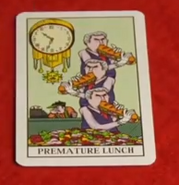 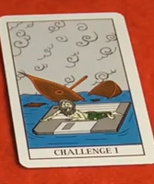 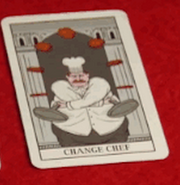 Ocean Genesis (left), The Fog of War (centre), and The King is Dreaming (right)