The Children of B.I.G. B.R.O.N.C.O. are artificial financial lifeforms created by Bear Stearns in their underwater research facility, B.I.G. B.R.O.N.C.O., on Bon Bon Island as part of their pursuit for eternal corporate existence[1]. They are the ghostly passengers Franco meets whilst travelling on the Light Rail.

Each child was bonded with a mortgage from birth, but one by one their birth mortgages collapsed. As they exist outside of order and chaos, they did not die, but became ghosts; whilst their physical influence on the world is no longer felt, their intentions linger. 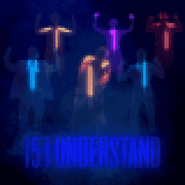 The LTAS gif for 15, depicting the Children of B.I.G. B.R.O.N.C.O.. The text reads, "I Understand", and marks the beginning of the countdown sonnet