The Secretary, or simply Secretary, (born 1979; age 28) is a female character first formally introduced in How to Pronounce 31, and is the receptionist at Bear. She is played by Betsy Winchester.

Before working at Bear, Secretary was a salesgirl at a yacht superstore in Long Beach, LA.

After she bought her signature flamethrower, she was heavily in debt, so her friend took her to an art  gallery to cheer her up. There, she met Jackie Dalton, CEO at Bear. The pair immediately hit it off, and soon she was one of "Jackie's Girls".

Sometime after this, but prior to July 4, 2007, Secretary accompanied Jackie on the mission, during which she used her flamethrower to burn down a local Magistrates' office. 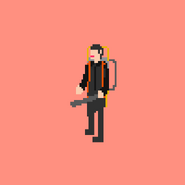 A depiction of Secretary from Bravodex

Cartoon of Secretary barbequing cubed ham with her flamethrower[1]